Over the past month, I have been reading Mr Peal’s Progressively Worse with disturbed fascination. For someone coming from the Scandinavian education system, with a very different ethos and political history, this book is an eye-opening insight into some of the visceral controversies over UK education, and a stern warning to any outsider attempting to enter that particular minefield.

Nevertheless, inspired by Andy  Tharby’s (@atharby) brilliant article “English teaching and the problem with knowledge” I shall venture forth onto the battlefield waving my pass of diplomatic immunity.

…does what it says on the tin?

As those who have enjoyed Socio(pathic) Skills; the dark tangent of Student-Centred Learning? and other related posts will know – and certainly my students will confirm – I agree with Mr Peal on a lot of basic issues: I absolutely do not accept that a 13-year old student and a 50-year old teacher are “equals”, or that “strict discipline and moral education are oppressive”, or that “hard knowledge” should not be taught.

My problem, rather, is one of semantics: Mr Peal’s use of terms such as “child-centred learning,” “collaborative learning,” “enquiry,” “21st Century Skills,” “social contructivism” actually prompted me to spend the first ten minutes of last month’s PGCE session at the Institute of Education defining the difference between structural Cooperative Learning and the classroom chaos and abysmal teaching the book describes under these headings.

Some crass examples from the book include a history lesson about the the South-North escape routes used by American slaves where pupils baking biscuits using an original slave recipe is claimed to be “…promoted by child-centred educators as an engaging and memorable way to learn…” and an English lesson where acting out scenes from Of Mice and Men was seen as an effective way to teach Steinbeck (p. 190). In Denmark we would call that Home Science and Drama respectively.

In his introduction, Mr Peal calls for a balanced view on teacher-centred vs. student-centred learning and then goes of on a well-documented 298 page rant against the latter. In the following, I would like to pour oil on troubled waters by presenting the novel view that:

Scenario One; boards to brains or vice versa

To better understand the issue in a practical classroom situation, let us examine an example where both teacher-centred and student-centred learning are viable options. In this MFL example, we need to teach passé simple of French verbs. (Think past tense –d and –ed in English).

The teacher might simply explain while writing out rules and examples on the board (5-7 minutes), followed by one or two standard concept checking questions  in open class (3-5 minutes) – and then hand out the worksheets. Less than 15 minutes of Talk&Chalk – simple and effective, at the right time with the right class.

Alternatively, the teacher might do this by writing only examples on the board with no explanation (2 minutes), then giving students one minute to work out the rules individually, followed by two minutes to compare and negotiate findings with a shoulder partner. Only then does the teacher write the rules on board, etc. etc. – but here, the concept checking questions are based on what was overheard when unobtrusively monitoring partner interaction.

Scenario Two; why drill when you can frack?

Then there are examples where social constructivism makes no sense, for several reasons, the obvious example being teaching of no-nonsense facts, e.g. the conjugation of faire, Henry VIII’s birth date, etc.

Another, and less obvious and much more interesting example, is provided by Andy Tharby (@atharby) in his must-read “English teaching and the problem with knowledge” relating to the – often – extremely superficial reflections by students being asked to analyse and interpret deep texts, because they simply lack the cultural baggage needed for decoding.

Mr Tharby writes: “I think that, for many years, I have been asking the questions before securing the knowledge needed to answer them. The solution might be to teach interpretations of a text as discreet knowledge.”

In both these cases, “lighting-the-fire-not-filling-a-pail-social-constructivism” is ineffective: In the first example –  memorising those famous historical key dates and names, difficult spellings, or the 50 most common French irregular verbs – because of the high volume of the knowledge. In the second – memorising interpretations of Of Mice and Men and Othello as packs of discreet knowledge –  because of the high density of the knowledge.

There’s no way to time-effectively negotiate your way to this information, so why would you employ social constructivism? –  à la mode or not, it is simply not good teaching practice here. But, before Mr Peal likes this post on Twitter for supporting traditional teaching, the next question arises: Must leaving social constructivism make the lesson a boring, teacher-centred drill?

And this is where I feel Progressively Worse sets up an entirely false dichotomy; simple interaction strategies such as Catch-1-Partner let students process and memorise high volumes of hard information in an engaging fashion. Using Q&A flashcards – question on one side (When and where was Henry VIII born?), answer on the other (28 June 1491, Greenwich Palace) –  in Catch-1-Partner for 5-10 minutes at the start of every lesson, an incredible volume of information sinks in, especially as the knowledge is integrated and operationalised through other learning materials and strategies, such as guided reading, worksheets, etc.

For those new to this blog, here is a course slide with the practical steps of Catch-1-Partner with materials:

Note that Catch-1-Partner is only one of several CLIPs (Cooperative Learning Interaction Patterns) which work with flashcards. Also remember that interaction may be peppered with French/Tudor greetings and pleasantries, complex sentences based on gambits may be added, etc.

In the case of interpretations of texts, as Mr Tharby suggests, cards might well be a size A4 per novel, or a single novel might have a full flashcard set, but the interaction steps of Catch-1-Partner are the same: Students are milling around, exchanging cards, teaching each other, learning; it’s active, fun and engaging, there is a sense of winning and achievement as more and more cards are instantly recognised, and, in the students’ minds, the teacher is not there.

Yet I think even Mr Peal and Sir Michael would be hard pressed to label  this type of brutal rote learning “progressive,” “lefty,” “child-centred,” or “social constructionist.”*

Student-Centred or not? Who cares: As teachers who use CLIPs systematically will attest, there is an instant measurable effect on attainment. We need only refer to the Sutton Trust Report and our work with Stalham Academy.

Through brutal, repetitive rote-learning, camouflaged by the excitement of interaction and movement, structural Cooperative Learning facilitates teaching of requisite building blocks of hard knowledge. (We would call it Fracking for its effectiveness compared to standard drilling techniques, except that, as a side-effect, it actually improves the (classroom) environment. More on CL and social skills here).

What we say is that CLIPs such as Catch-1-Partner, as expounded in the Skills & Mastery CPD course at Stalham Academy, allows this “focussing on the mastery of these small, discreet items knowledge in the short term,” referred to by Mr Tharby.

In the long term, this lays the foundation for, in the case of English, higher level analysis and interpretation, in the same way that vocabulary and grammatical rules would provide a foundation for speaking a foreign language fluently.

And that is the focus of the next post in this series: What happens when Dorothy leaves Kansas, or Mr Andersson unplugs from the Matrix? When students are on their own in the uncharted territory of an unknown novel, or discover they did not learn Parisian slang in MFL, or that everything they have learned as essentially true is – perhaps? – a social construct.

“When there is no Spoon.” 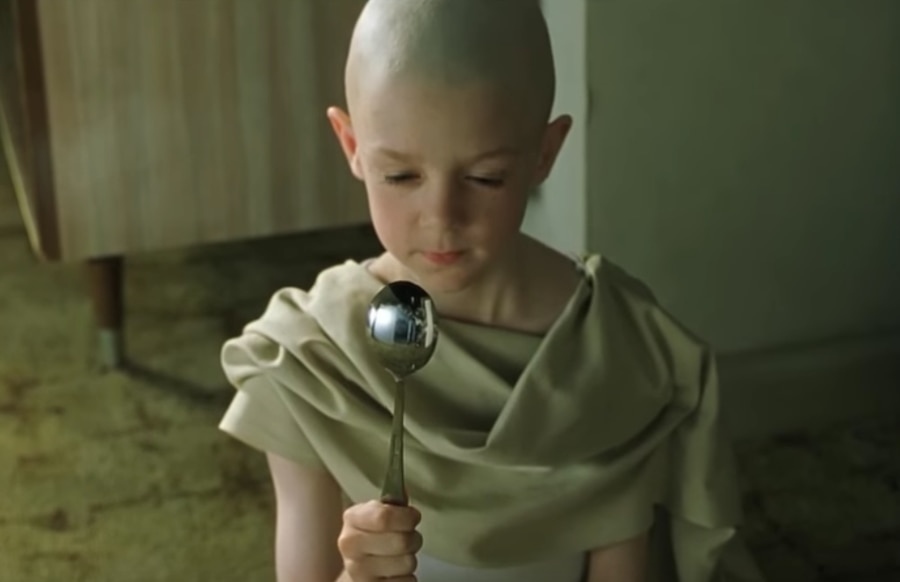 Click image for link to this scene from The Matrix.

Get notifications of related posts on twitter.
werdelin.co.uk is the business end of cooperativelearning.works.

16 thoughts on “Deconstructing the Progressive-Traditional Dichotomy; a note to Mr Peal”